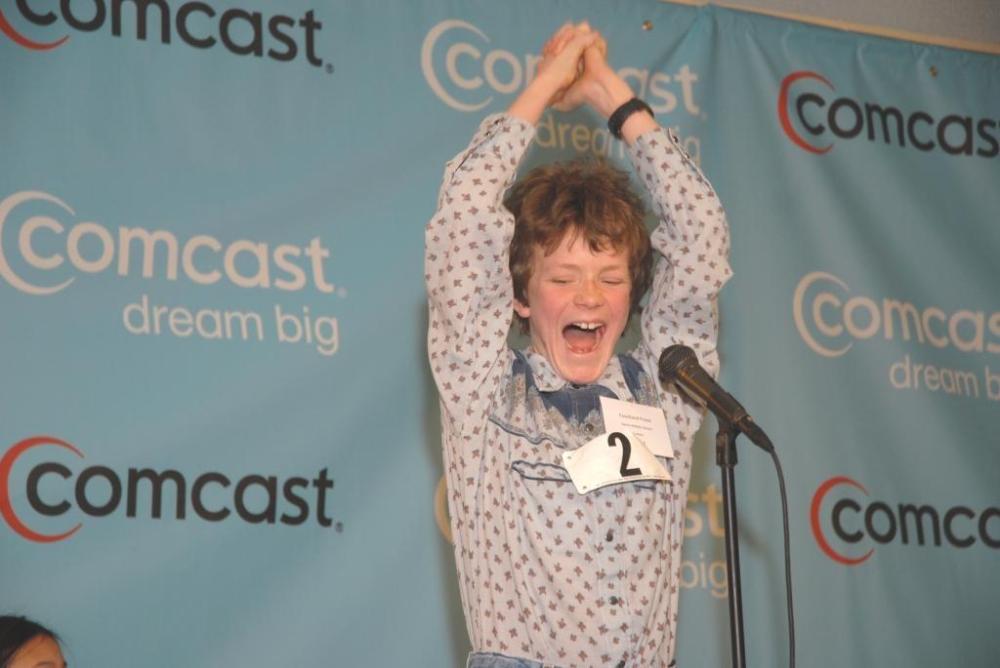 We are back again with People Doing Things: Canton Edition, and this week I have decided to focus on Canton High School Senior, Courtland Priest. Originally from neighboring Stoughton, Massachusetts, Courtland moved to Canton and started at Galvin Middle School in the sixth grade. Almost immediately following his move to Canton, Courtland made a name for himself academically. After winning the school spelling bee as well as the state spelling bee, Courtland travelled to Washington D.C. for the prestigious Scripps National Spelling Bee. Not only did he represent Canton as one of the bee’s esteemed contestants, he impressively finished in 49th place in a competition of 275 students that featured a strong amount of older seventh and eighth graders.

Courtland’s participation in school activities has carried into his high school career in which he is very involved in athletics as well as various extracurriculars. A member of both cross country as well as the track team, Courtland is one of the school’s most impressive long distance runners and leaders, earning him the honor of being a captain for both the fall cross country season as well as the spring track season.

Furthermore, Courtland is a gifted pianist. A hobby that has allowed him to play in the school’s jazz band as well as the plays and other performances also permits him to give back to the community. In the summer, Courtland volunteers as a music teacher at a camp at the high school, teaching younger children about what makes music special to him. In the fall, Courtland will begin his career as a college student studying engineering at Tufts University in Medford, Massachusetts.

After an extended break of over three months, I have returned to continue working on People Doing Things, my blog which highlights some of the unique and exciting individuals the Canton community has to offer. I am going to begin my reappearance with a post shining a spotlight on one of the most talented athletes Canton has to offer, Nicholas Ainscough. A senior at Canton High School, Nick has spent his entire life engulfed in his passion, the game of soccer. The son of a former professional and collegiate coach for over two decades (including roughly 15 years as a Division 1 head coach) and the brother of a professional in the Icelandic circuit, Nick developed a love for soccer at an early age.

From coaching younger players at soccer camps in the summer to watching his favorite team, Manchester United, play on weekends, he gives everything he has back to the game. Furthermore, Nick is employed by Go Play Sports Tours (found online at http://www.acis.com/goplay), a travel agency that compiles international itineraries for travelling soccer teams. Eager to share his appreciation for both soccer and European culture with his peers, Nick works to enhance the travel experience for a wide range of young athletes.

A fearlessly dedicated defender, Nick has excelled in the sport as the captain of his academy team with FC Boston Bolts, so much so that in the upcoming fall, he will be continuing his career as a Division 1 student-athlete at the University of Delaware. Without a doubt, Nick is a gifted athlete whose honor, talent, and dedication for the game of soccer are something Canton should both be proud of and excited to follow in future stages of his career.

For my fifth post, I have decided to try something a little different. Rather than write about another interesting student at Canton High School (and there are definitely plenty), I am going to reflect on my initial experiences blogging. It is not something I had ever tried before creating this page, nor was it even something that had crossed my mind. Instead, it was a class assignment–to create a blog that revolves around a topic that interests the journalist. In my opinion, this assignment was designed to encourage creative writing by allowing students to choose a topic meaningful to them and to further examine the regulations that outline successful, objective journalism. Choosing to write about my peers at Canton High School is something I am definitely glad I did, It motivated me to learn more about my colleagues and provided an opportunity to write in a different manner. Rather than analyzing a classical piece of literature or using research to derive an opinion about a historical event or character, I was able to learn more about the people in my community and what makes them special.  The aim of my writing was to show that each and every person is interesting and possesses attributes and achievements that make them unique. In sum, I hope that my audience (however big or small it may be) enjoyed learning about these students as much as I enjoyed writing about them. However, to be honest, I have barely even scratched the surface, there are so many more unique, individual characters at Canton High School deserving of recognition for their great achievements, awards, and accolades, whether they are academic, athletic, artistic, or anything else.

For my next publication, I have elected to write about Woanyen Mahn, a senior at Canton High School. Woanyen is an exemplary student-athlete producing extraordinary results both in the classroom and on the field, where he exemplifies what it means to be a leader. During the middle of eighth grade, Woanyen, a twin, made a cross-country relocation with his family from Oregon to Canton, Massachusetts.

As a football player, basketball player, and track runner, Woanyen has shown great talent and significant improvement, vindicating his hard work and dedication for his sports. As a freshman, Woanyen was the only member of his team promoted to the varsity basketball roster for the state tournament, in which he made the most of his time on the court, scoring six points on both of his shot attempts. His dedication did not go unrecognized by the coaches, as he earned the freshman team’s Commit Compete Award, presented to the hardest working member of the team, an award he received again later in his career. His successes on the court continued as he made the varsity roster as a permanent team member his sophomore season and was named a varsity captain for both his junior and senior seasons.

His football career has been no different. As a senior, Woanyen was both Offensive MVP (Most Valuable Player) and a captain of the varsity football team, which barely fell short of making the playoffs despite a strong, winning record. Individually, Mahn enjoyed success, being named both a Hockomock League All-Star and a Hock 5 Defensive Back, honoring him as one of the top cornerbacks in the league. As the spring and the track season are approaching, Highlight videos from Woanyen’s most recent football season can be found online at http://www.hudl.com/athlete/3375747/woanyen-mahn.

Woanyen shows no intention of slowing down. Named the track team’s Most Improved runner following the spring of his junior year, Mahn aims to continue his success and capitalize on his improvement by earning further accolades.

It is clear from his countless awards and honors that Mahn possesses unparalleled athletic ability and dedication, motivating Canton’s tri-sport captain to continue his athletic career by competing at the collegiate level starting next fall.

For the third publication of People Doing Things: Canton Edition, I have chosen to write about Canton High School senior, Sean Murphy. Sean, the oldest of six children, lives a life full of responsibility. His days are often filled with schoolwork, athletic responsibilities, and the task of watching and driving his four younger brothers and his younger sister to their various activities. Sean’s high school career has been filled with hard work and dedication, culminating in his recent acceptance to Elon University under the Early Decision program. Throughout his time at Canton High School, Sean has experimented with different athletics and extracurricular activities including basketball and baseball. However, his favorite activity has become wrestling, a sport he began playing during the winter season of his sophomore year. Sean’s hard work and understanding of the sport and its fundamentals earned him a spot as one of the team’s captains during his senior season. Being accepted to college early has allowed Sean to put more emphasis on his wrestling career which has quickly paid off, earning him a winning record so far this season despite a painful shoulder injury that temporarily rendered him unable to wrestle. Sean hopes to continue his strong season as the Hockomock League Championships and the state tournament are fast approaching. The wrestling program’s next home meets include Milford (Wednesday, 1/27/16 @7:00 P.M.) and Stoughton (Tuesday, 2/2/16 @7:00 P.M.) at which Sean aims to further extend his already stellar season. 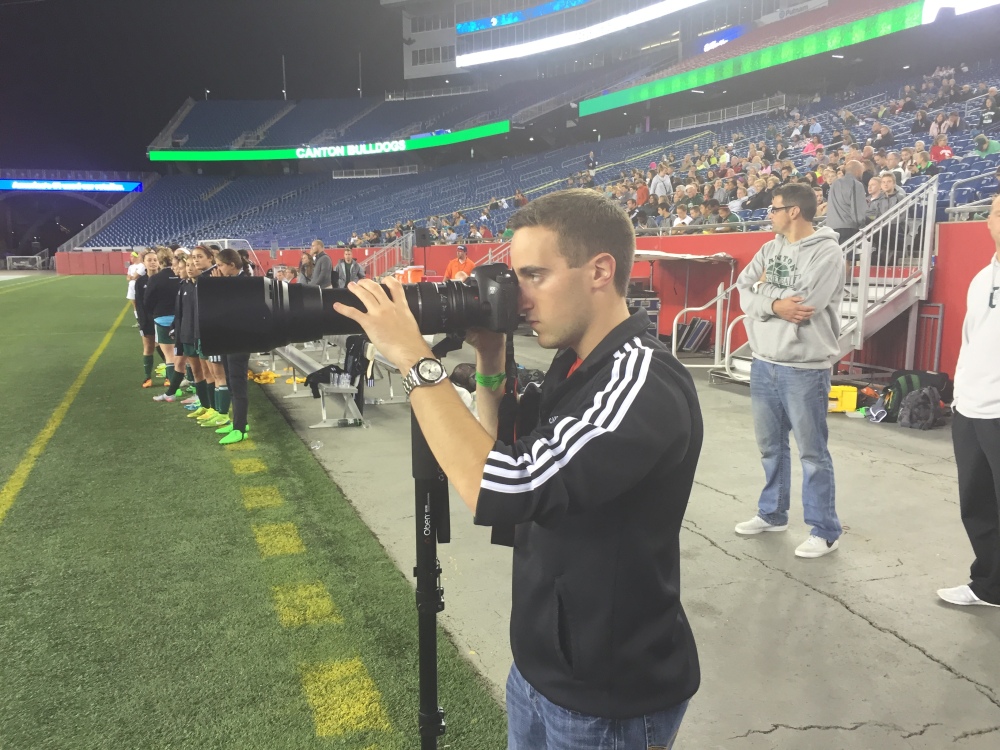 Next, I have decided to write a blog post about another Canton High School student, senior Jason Kaplan. What makes Jason so interesting? Why write about him on this publication of People Doing Things? Jason is a hardworking, ambitious student who is always striving to improve in every aspect of his character. While this may not necessarily separate Jason from all other students at Canton High School, Jason is certainly unique. Not only is he a talented student and a dedicated athlete, Jason is a young entrepreneur who aims to succeed in a variety of business opportunities. Over the last few months, he has kick-started his own photography company, Kaptive StudiosTM (which can be found and explored online at http://kaptivestudios.com/) which has enjoyed surprising prosperity. From photographing local students’ portraits to capturing the Canton High Soccer Program’s unique opportunity to play in a game at Gillette Stadium, home of the 4-time Super Bowl Champion, New England Patriots. While maintaining his photography company, Kaplan has most recently embarked on a new project; creating a feature video that accurately captures the inspirational qualities of CHS student, Matt Marcone. In the past week, Jason released a trailer for his upcoming production online at https://www.youtube.com/watch?v=GO0IVKkvAME. Matty, plagued by a rare genetic disorder diminishing bone marrow, recently got to live his dream by playing in a varsity hockey game, in which he scored the game-tying goal. Jason is motivated to educate people about Matty, what makes him so inspirational, and how his humility allows him to put a heartwarming, positive spin on his condition.

For the first publication of People Doing Things: Canton Edition I have decided to write about my classmate and Canton High School senior, Jack Cudmore. Jack is a dedicated, well rounded student-athlete. He is a member of the National Honors Society, Junior Statesmen of America, and is also a member of Canton High School’s wrestling and football programs. Like myself, Jack has recently embarked on a new endeavor, starting his own blog. With his new interest, Jack will be cooking new recipes and uploading his personal opinions regarding their ease of production as well as taste. This blog, titled What’s For Dinner, can be found online at http://cudmorejp.wordpress.com/. Being a patriotic individual, Jack aspires to attend the United States Military Academy and ultimately serve in some branch of the military.

I am going to post about different interesting people at Canton High School, primarily students.

The topic will be students at Canton High School.

In order to fulfill the post quantity requirements over the next few weeks, I intend to post twice a week, once at the beginning of the week and once at the end of the week.

I did not do anything very exciting during my winter vacation from school. I did not travel anywhere and spent time going to the gym and the movies. I saw the new Star Wars movie and thought that it was easy to follow but still exciting and very good, I would recommend it. Luckily, the Canton Public Schools’ interim superintendent mandated that no homework be given to CHS students over the duration of winter break. Although this is my last year at Canton Public Schools, she has received my vote for permanent superintendent. Now we are back in school and plagued by several full weeks until February vacation, hoping for a snow storm.